Hiking and eating in the Alps

I hike/ run/ ski/ bike/ snowshoe because I really like...

One of the perks of hiking in this neck of the woods is the Alpine hut culture and cuisine. Located often in remote locations with delivery of goods arriving on small goods lifts or by helicopter and minimal resources, you will often be blown away by the tasty food they can whip up. Best of all, the mountain location means using local mountain resources- milk, eggs, cheese, butter, berries- fresh from the mountain pastures. Hearty and tasty food well earned after an active day in the mountains. 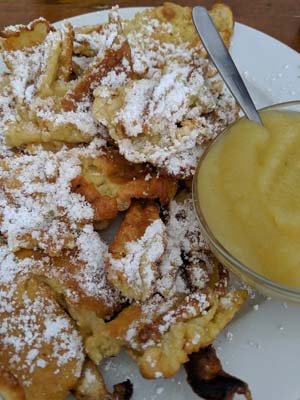 Literally meaning Emperor’s Madness – this fluffy, chopped up pancake with raisins was traditionally made to use up lots and lots of eggs and is often served as a main meal. If you have ever mistakenly ordered it as a dessert you will understand why.

A genuine Kaiserschmarrn will take around 20mins to prepare, so if you want to order it be prepared to wait and if it comes straight away then be warned…. Often rum-soaked raisins are mixed into the batter and sometimes the Kaiserschmarrn is caramalised when finished- giving it even more sweet bang for the buck. It is mainly served with either puréed apple, stewed plum or mountain cranberry (Preiselbeer) jam. 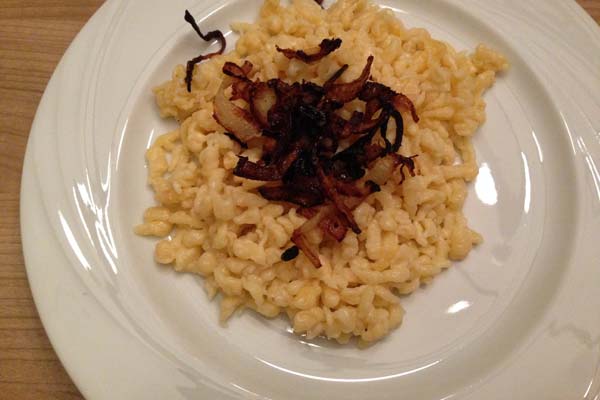 Considered a Swabian speciality, Käsespätzle can be found pretty much from Lake Constance across the Alps going East and South to the Italian South Tyrol. A base of flour, egg, salt and oil meant they were a stable part of the diet in less wealthy alpine farming communities. Now they are part of the menu on most ski lodges and alpine huts. Best eaten fresh, these cheesy noodles are a quick and easy one to whip up at home when you have little left in the fridge- but you will need a Käsespätzlehobel (indeed… have fun pronouncing that!) Using this indispensible Bavarian kitchen item that ressembles a cheese grater the dough drops in smaller bits into boiling water and turns into a little noodles. Removed from the water, layer with grated tasty mountain cheese like an emmental and top off with fried onion rings. Warning: don’t expect to be hiking for another few hours after this one! 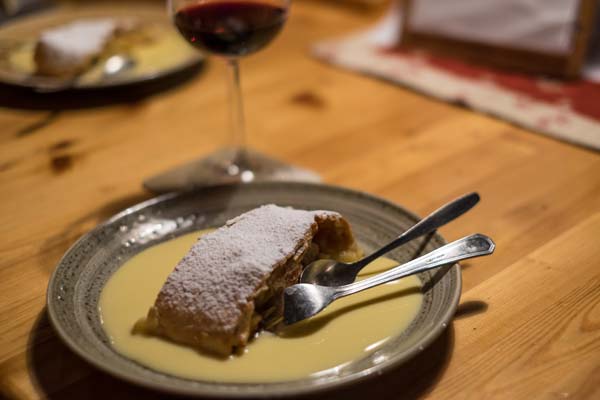 Cream-coloured ponies and warm apple strudels… these are a few of my favourite things… how can we therefore talk about Alpine food and not mention Strudel? Originating from the Habsburg days in the Austro-Hungarian empire, this pastry filled generally with sweet goodness is best enjoyed warm with either a vanilla custard sauce or a scoop of vanilla ice cream. The most common filling is a mix of apple, nuts and raisins, but its filling as well as the pastry varies from hut to hut and city to city across the Alps, so you can justify tasting it again and again! Also worth trying is Topfenstrudel (sweet quark filling). If you are passing through Innsbruck, be sure to make a stop at the Strudel café where you can try various fillings- sweet and savory. 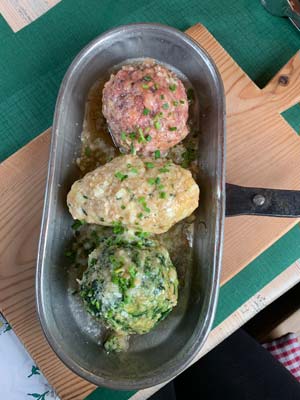 Who says vegetarians don’t have all the fun? These tasty balls of spinach, garlic, onion and bread are often topped in a cheesy buttery goodness and are sure to fill your belly after a long ascent. Another relic from more frugal days where old dry bread was re-used to make dumplings. Spinach just happens to be our favourite but where there is a spinach dumpling you will most likely also find a bacon dumpling (Speckknödel) or cheese-dumpling (Kasspressknödel)- most often in a bowl of broth and sometimes fried on salad.

Another real treat is a Jausenbrett – snack board- which can either be cheese, meats or mixed. This is like Alpine tapas with the best of the local cheeses, sausages and smoked ham. Served up with bread and delicious butter (sometimes you can almost taste those alpine flowers in it…) Again, varies from hut to hut. Arguably the best of these can be found in the South Tyrol, where you can also enjoy the cumin scattered bread specialities Schütterbrot (crunchy bread with cumin grains) and Vinschgau rolls- all best washed down with a nice glass of the local red wine.

These are just a few of our favourite things…of course you will find Schnitzel with noodles, plenty of pork in all forms, goulash and all manner of freshly made cake. Best of all, local products and fresh ingredients.

For a good taste of these Alpine delicacies join us on our Transalp trek from the North Alps of Bavaria, through the Tyrol into the Italian South Tyrol- seven days on foot through mountain pastures, huts and refuges where you can sample all of these and more. Check out for more information:

Ticked off: a guide for ticks

Get Fit for the Trail

Winter sport and Covid-19 in Bavaria

Day trips into the Mountains by train from Munich

Hiking in the time of Corona – Pre- during & post tour check-list!

Hiking and eating in the Alps

Hiking in the Bavarian Alps, how to reduce your environmental impact

These boots are made for walking

Dressing for the mountains – hiking

Get our top tips, latest news and offers!